Why I Laugh at Death

Home/Uncategorized/Why I Laugh at Death
Previous Next

Why I Laugh at Death

A very strange things seems to happen to me every morning. I don’t try to make it happen. A flood of thoughts and memories rush through my mind. I ponder my age (I’m nearly 61), I ponder the things I used to want, I ponder my younger more ignorant self, I ponder my mortality. In a flash I see myself in a downhill luge screaming headlong into the gaping maw of death…

… and I bust out laughing.

For the life of me, I can’t really explain why my inevitable death is so damned hilarious to me. It’s not like I’m longing to die, I’m not. When trying to explain the humor to others I am usually greeted with polite but strange looks. They ask if I’m a particular morbid person or if I have a death wish. I don’t.

I occasionally work with clients who have an extreme phobia of death. My heart goes out to them. I get why some people fear death. For these people, I don’t think it’s a good idea for me to tell them my views, so I don’t.

For me death is just so inevitable, but not in a sad way, like losing a friend. It’s like the very best punchline of a joke. Of course you have to laugh.

Maybe the origin of this weird humor is a story I read from hindu literature. One of the Gods decided that he wanted to find out what it would be like to be a pig so he became a pig. While incarnated as a pig he completely forgot he was a god and proceeded to do everything a pig would do, much to the disgust of his fellow gods. They would beg and plead at him to return to his divine form but he could only persist at being a pig, doing piggy things. Finally, the other gods got fed up and sent a messenger to kill the pig. The moment the pig was killed the god rose out of it’s body laughing “Thank you for letting me out. That was wonderful!” or words to that effect.

There are  a lot of ways to feel about death. Mine is just one of them. If you have a comment or want to share your twisted view of death, Have At it. Leave a comment. 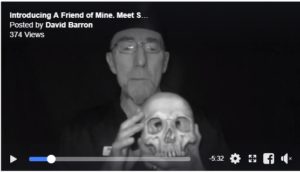 Click the image to hear me talk about my plastic skull named Skully.