Home/Uncategorized/What Is A Motivational Imperative?
Previous Next 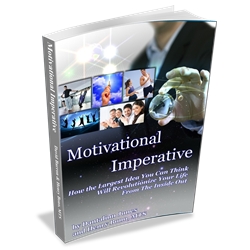 The concept of a Motivational Imperative came from a science fiction TV series named “Earth: Final Conflict”. In the show aliens came to Earth with the pretense to help humanity. They enlisted humans to act as assistants and bodyguards, giving them special powers. Piggybacking on those powers was a “Motivational Imperative” ensuring these humans would always act in the interest of the aliens, even to the point of self-sacrifice. From this beginning the story unfolded.

hat I concluded is that having a Motivational Imperative gives a sense of meaning to life. It can also give meaning to even the seemingly meaningless events. I further concluded that a Motivational Imperative seems to be the one thing we all want to have. Consider how some people wander through life trying to find something to grab their interest. Without something to guide them, they fill their time with hobbies, sex, passing interests, even drugs, all in the hopes to make their time feel meaningful. Of making their time feel meaningful?

Let us start by breaking down the two words “Motivational Imperative”.

First, “Motivation” is defined as “the reason behind our actions and behaviors”. One definition is “Having to do with …Internal and external factors that stimulate desire and energy in people to be continually interested and committed to a job, role or subject, or to make an effort to attain a goal.”

“Imperative” as a noun is defined as “an important or essential thing”. It can also be defined as an order, something that has to take place. Something important, 2. Something commanded, 3. Something absolutely necessary.

Combined, they come to mean “an essential thing, reason or quality that is behind all our actions and behaviors” It has the qualities of being a command, an order, as well as absolutely necessary.. This accurately describes the values held by the human bodyguards in the series “Earth: Final Conflict”.

Being ever the devious social researcher, I wanted to dissect and reverse engineer a Motivational Imperative without resorting to extraterrestrial technology. With my background in hypnosis, neuro linguistic programming, covert influence I might be able to help myself and others to live a meaningful life by building Motivational Imperatives, first for myself then for anyone who likes the idea.