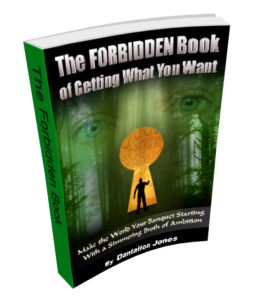 Click The Book Image To Learn More. It Will Only Take One Minute.

Way back when I was writing “The Forbidden Book of Getting What You Want” I set out to do a test of my will. A simple proposition was made: that no sentence written within the book will begin with any word starting with “I”. That meant no first person pronoun “I” and no other words beginning with “I” were to start a sentence. This rule had no dramatic effect within the book but it did have an effect on me.

My awareness became flooded with how often I start a sentence with “I”, as if all the world wants to know about what’s going on in my narrow little reality. Over the writing of the book following this self-imposed restriction became easier and easier, but it had a more lasting effect on my communication in general. By following this restriction it forced me to think of other ways to say things and, in turn, improved my writing. Also improved was my ability to express myself in words.

The change that I didn’t expect was how much more aware I became of my ego and sense of identity. By simply starting a sentence with “I” the focus of that sentence is turned to me and not the reader, and it’s the reader who is the beneficiary of the the book, not me. The exercise forced me to think about 1) the reader and 2) the information I’m want them to receive.

Since that time that restriction has been more actively enforced in the things I write. You will find exception for sure, but the mindfulness it forces on my have their benefits. As a game it’s a fun test of ones creativity. The test has even extended into my private journal writing for no other reason than it being a fun challenge.

Here are a few creative ways to follow the “No-I-at-the-start-0f-a-sentence” rule:

This exercise has been limited solely writing. There is a long history of spiritual acsetics who practice a discipline that restricts their speech. When trying to apply this exercise to speaking I consistently fall short. Speaking is second nature for us and we easily speak without much forethought. The effort can be exhausting and frustrating because failure is so easy. Nonetheless, it’s fun to try.

Finally, Did you go back to see if there are sentences that break the rule?