Food, Craziness and Success – When you hear these experiences it’s important to suppose all or part of it is made up. That makes it easier when people tell me “you made that up”. Nonetheless, all you have to do to experience weird things is live long enough and some of your stories will be just as bizarre.

This in one of those stories.

I was working with a client for three consecutive days (See “mind control publishing learning place“). We went out for lunch at a restaurant I had never been to before. We order our meals and I had the Chicken Bread Bowl. 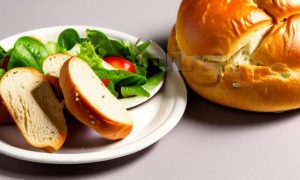 The chicken bowl took me back a time when I infiltrated a UFO cult by convincing them I was once abducted by aliens. FYI, if you ever have to do that don’t be surprised by all the questions about “being probed”. Apparently some UFO cults are really fixated about that. But anyway, they regularly had a chicken bread bowl that tasted almost as good as what I ordered at this eatery.

The cook at the UFO cult, a guy named Onar, took his job very seriously. I heard him several times yelling at the cook staff from the kitchen. He said he learned to cook in prison and got his best recipes from a hand written recipe book compiled over years from various prison cooks. “Chicken soup is a holy effort” he would explain. Indeed it is. The chicken soup that filled my bread bowl as sat here was sublime. I think Onar would have appreciated the effort.

The people around us eating seemed oblivious to the sacred nature of the food that was served there. The staff was kind and attentive but I suspect the REAL beating heart of the sandwich shop was the cook. At one moment during the meal a waft of air came from the kitchen and time seemed stop. “What was that smell?” Tamuric? Sage? Cilantro? My mind spun.

As I looked up all motion among the clusters of people eating had stopped. They were frozen in time by the enchanted cusp of air. One person held a sandwich inches from his open mouth. The smell had put them in a trance for nearly a minute. I have no idea why I was only mildly ensorceled… but I was nonetheless effected. After a moment I hear clash of something from kitchen and everyone went back into motion without skipping a beat. What did I just experience? 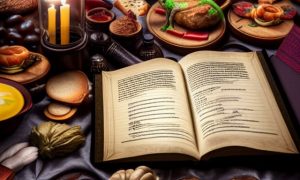 At the UFO cult, Onar, was also a secret occultist. His recipe book was a leather bound hand written manuscript filled with alchemical symbols and magical sigils. He would enter and leave his kitchen shift firmly grasping it in his hands. His recipes read like angelic evocations calling forth the flavors of spices along with their divine essence. You learned to read recipes from his book with great caution and reverence. If you looked into his grimoire longer than he wanted he would speed over and slam it shut in front of you. This was the magic that made up the chicken soup bowl.

What I got from all of this was when you focus ALL your energy to one ambition several things can happen. The first is that you can go seriously crazy. I’ve met lots of people who are so single minded they are “a little off”.  But the second thing that can happen is you can accomplish amazing things. Craziness can transform things into something transcendent.

Sponsor: If you want to know how to succeed by turning up your own personal pathology consider checking out “The Psychopathology of Success“.